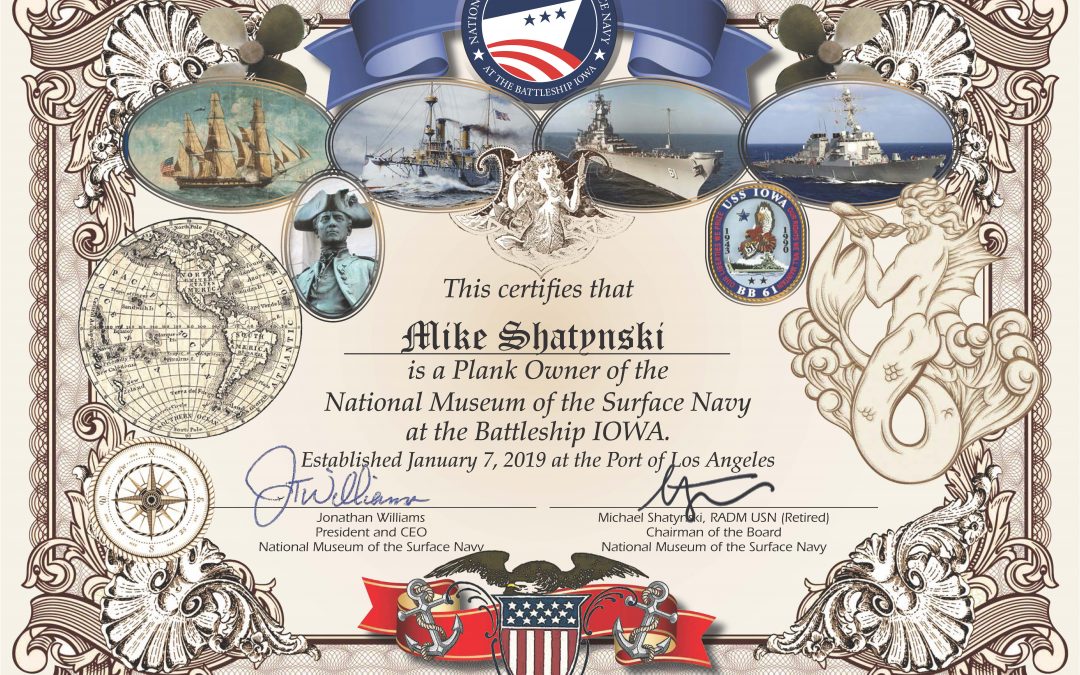 SAN PEDRO, Calif. – Jan. 4, 2021 – Battleship USS Iowa Museum, the historic U.S. Navy battleship that has become an iconic landmark and a top five museum and attraction in the Los Angeles area, today announced the launch of the Plank Owner program for the future National Museum of the Surface Navy. “Plank Owner” is an honorary title given to U.S. Navy and Coast Guard sailors who are assigned to a ship at the time of its commissioning. The free Plank Owner program provides a once-in-a-lifetime opportunity for individuals to show their support for the nation’s first-ever Surface Navy Museum prior to its opening aboard Battleship USS Iowa in San Pedro at the Port of Los Angeles.

Each individual who registers as a Plank Owner will receive a full-color, downloadable, personalized certificate suitable for framing. Plank Owners who donate $25 or more to the Museum will have their names permanently added to the Museum’s Quarterdeck of Honor, forever identifying them among the initial supporters that helped bring the museum to life.

When it opens aboard Battleship USS Iowa in 2025, the National Museum of the Surface Navy will raise awareness of the U.S. Navy Surface Fleet’s important role in international relations, free trade, humanitarian assistance, and technological innovation. The state-of-the-art museum will include a 270-degree theater experience, simulated combat engagement center, an interactive holographic globe depicting Navy operations around the world, and an interactive recreation of a modern Navy ship bridge.

“After 243 years as the Navy’s premier fighting force, the nation is finally going to have a museum that is dedicated to the past, present and future of the Surface Navy,” explained retired U.S. Navy Rear Adm. Mike Shatynski, Chairman of the Board of the National Museum of the Surface Navy. “The Plank Owner program provides a way for civilians and veterans from all services to share in the excitement and enjoy a sense of ownership as we bring this incredible museum to life.”

The National Museum of the Surface Navy will find its home aboard the storied Battleship USS Iowa. Throughout her 50 years of service, USS Iowa and the thousands of brave sailors that served aboard her, operated around the world protecting America’s interests during World War II, the Korean Conflict, and the Cold War. The “Battleship of Presidents” welcomed several Commanders-in-Chief during her long, storied history including Franklin D. Roosevelt, Ronald Reagan and George H.W. Bush. USS Iowa, also known as “The Grey Ghost” and “The Big Stick”, was decommissioned in October 1990, but continues to serve today.

“There is no better place for the first national museum dedicated to the Surface Navy to be located than aboard USS Iowa,” said Jonathan Williams, president and CEO of Battleship Iowa Museum. “As the namesake of the last class of Battleships, Iowa and the men and women that served aboard her contributed immeasurably to the country, serving missions around the world from WWII through the Cold War. We’re thrilled to become the home of the Museum and are looking forward to welcoming our Plank Owners aboard!”

Located in San Pedro, Calif., Battleship USS Iowa Museum is one of the top five museums and attractions in Los Angeles, bringing the ship’s history to life through in-person and virtual tours and educational programs for youth. In addition to providing a natural platform for veterans and patriotic civilians to come together as a community, Battleship USS Iowa Museum provides a wide array of impactful programs and resources that support the critical needs of our military and veterans.

The museum is operated by Pacific Battleship Center, a 501c3 non-profit organization solely supported by admissions, donations, event space rentals, and gift shop.  We do not receive government funding for our operations.